Microsoft is warning Windows users over a fake Microsoft security product that locks an infected computer and tries to trick victims into calling a support hotline (help centers). Tech-support scammers have gone to a new level of their technical game, creating a “severe” warning from Microsoft over new Windows malware that imitates Microsoft’s free Security Essentials antivirus, and then displays a fake blue screen of death, or BSoD, with an error message and a suggestion to call a 1800 number that is not a Microsoft support center.

The malware, which Microsoft calls Hicurdismos, disables Task Manager to prevent the user from stopping the fake BSoD and hides the mouse cursor to make the user think Windows is not responding.

Hicurdismos is a good example of an emerging tactic that’s having greater success at linking younger people into tech support scams. And also, scammers are using pop-up ads and fake security warnings to encourage people to contact a bogus support center.

“Real error messages from Microsoft do not include support contact details,” Microsoft said on its Malware protection center blog, telling people about the new threat. It also never asks for payments for giving tech support.

“We’ve seen attackers becoming more sophisticated with their social-engineering tactics to try to mislead users into calling for technical support and then they are asked for payment to ‘fix the problem’ on the PC that does not exist,” Microsoft added. 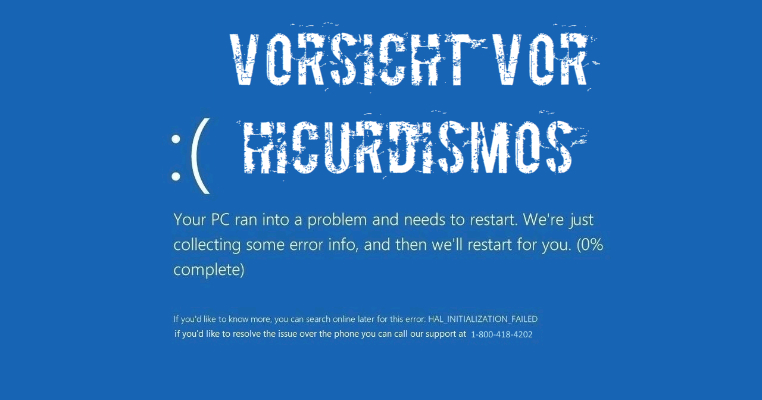 However, users of the newer server versions of Windows can still be tricked into installing the fake Security Essentials and if they do, they will see a BSoD message that is identical to the real BSoD error message in Windows 8 and 10.

According to Microsoft, the malware is from a company claiming to be Bluesquarez LLC. Once installed, the file uses a similar castle icon to Security Essentials but a different filename, setup.exe.

A recent survey by Microsoft found that half of the respondents aged between 18 and 34 years had fallen for a tech-support scam. 😉