The new patent of Microsoft annuncedthat Microsoft is working on a new concept for a device with three displays. There’s no doubt that Microsoft continues to look hard at new and potentially innovative concepts for its hardware line. Well, this isn’t the first time that Microsoft submitted a patent application for a device with a foldable display. From this latest patent’s implies, however, it appears that this concept is aimed more at a tablet-sized device than a phone. The third display is not located in a formal position because it is located on a devices hinge. The specified foldable device has two regular-sized screens apparently, and there is a third display located on the hinge that separates the two main display phases. The patent for this interesting innovation was filed in November 2016.

The title of the patent application is “Device having a screen region on a hinge coupled between other screen regions.” It reveals the idea is that to create a foldable tablet that has a working screen located on the central hinges. According to its description, the device would initially determine the condition of the hinge located between the two main display areas, indicating that it would be able to determine when it’s folded completely, open completely or open at an angle. Then, based on the state of the hinge, the third display region would display relevant information, which could relate directly to either – or both – of the larger displays.

Actually, this concept sounds really amazing because having another bigger screen for a foldable smartphone or for a laptop, over the hinge of its device could be useful to many professionals in the future. As well it could be incorporated into the ‘rumored Andromeda device’ that Microsoft is apparently working on. Not only that, another recently published Microsoft patent showed a foldable device with a “smart hinge” – sensors on the hinge would broadcast information about how the product was being held and would orientate the screen accordingly.

The information that is to be displayed on the third screen (hinge region) could be virtual control, notifications, time, and messages or call. Such a hinge would make sense when the device is in laptop form factor with one display being located on a surface of an object. The new device would determine information to be displayed on the screen region of the hinge that is channeled to other screen regions according to realization. 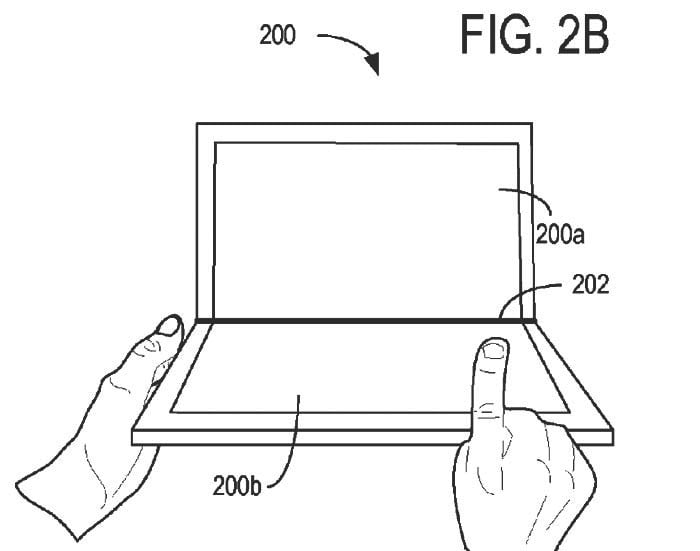